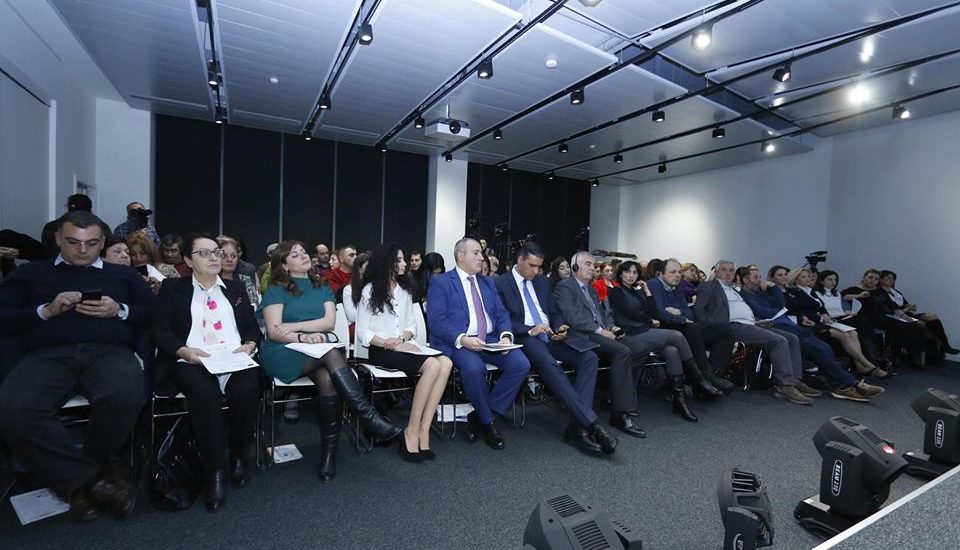 The discussion was initiated by joint efforts of Public Journalism Club and D-V-V International Armenian office within the frames of “A Public Glimpse into a Closed World: Human rights situation in closed institutions in Armenia” project funded by the European Union and Open Society Foundations- Armenia as well as within the frames of “For Human Rights: Prison Education” project funded by the German foreign ministry.

Seda Muradyan presented the two-year long project “A Public Glimpse into a Closed World: Human rights situation in closed institutions in Armenia” that kicked off in December 2017, which is carried out jointly by Public Journalism Club and Investigative Journalists NGOs.

She stresses as the objective of the project human rights situation improvement in closed institutions through public awareness and debates on the existing issues and possible solutions.

“With the project we want to tear off the so called walls have been there between those institutions and the public, between them and journalists and try to make that system more transparent for and accountable to the public”, Muradyan noted.

Ester Hakobyan presented the project “For Human Rights: Prison Education”, which is parallel carried out in Belorus, Moldova and Ukraine within the frames of “Prisoners’ Education International Network” founded by D-V-V International in 2017. The network is aimed at raising awareness of education rights of the convicts and the released.

“The project is aimed at informing the public of the convicts’ education rights as well as channel that awareness to political platforms via policy related discussions” Hakobyan said.

Ekaterina Dorodnova, head of political, press and information section of the EU delegation to Armenia, said that education right in prison is a very sensitive and important topic. “That’s why the EU supports this project. We consider human rights as global values, the human being must be protected regardless of where they are. The prisoners’ education right is beside those of health and others. All prisoners should be able to take part in the cultural life of the country. By right, we encourage that circumstance and that those in freedom be informed of those behind the bars.”

Arshak Gasparyan is sure that education in prisons should be not only formal but also informal, that is to say participation in cultural, sports and other events.

“The tools to gauge professional and personal qualities of a person working in Abovyan penitentiary institution must be distinct and clear”, Gasparyan added.

He noted other important issues related to the implementation of education rights in penitentiary institutions, such as prisoners’ inclusion in educational programs and continuing education, the opportunity of getting education outside the institution or taking part in trainings is not implemented, PI-Educational institutions collaboration is still poor.

“The penitentiary service needs improvement personnel-wise. Such a mechanism is more than important when it comes to juveniles and selecting staff in their institutions”, Gasparyan added.

Artur Sakunts noted that a person who committed a crime should not be deprived of his education right. “The education system must be turned to be humanitarian. The prisoner is not given a chance to continue his life after being imprisoned.”

“The prisoners do not have an opportunity to fill the day with any activity. So far there has been no education related concern only because there is no education in PIs. The education right must be emphasized. It is not the subject who committed a crime that must be considered but rather the object who must continue the education,” Sakunts says.

He also pointed out to the issue of PI library replenishment. The PI should not be viewed as an archive for old stuff.”

Gohar Simonyan, coordinator at Human Rights Defender staff national prevention mechanism, says that there are a lot of problems in the field that await solutions.

“The Human Rights Defender receives a lot of complaints regarding continuing education of prisoners. The HRD closely follows the prisoners’ right to work, education and link with the world”, Simonyan emphasized.

Gayane Hovakimyan said that the primary issue is to bring the education discourse into the system and draw public attention to their joint solution.

“We have individual programs approved by the ministry of education that will be carried out not only in Abovyan penitentiary but also in respective places. Education does not only play an enlightening but also gives knowledge and experience. We have started informal continuous education programs. We have also found out that in Abovyan penitentiary women do not have elementary knowledge regarding healthcare and so we started the course “Healthy Lifestyle”, Hovakimyan said.

“One of our targets is carrying out respective improvements in the field of education to be able to implement the education right in penitentiary institutions”, Sargsyan added.