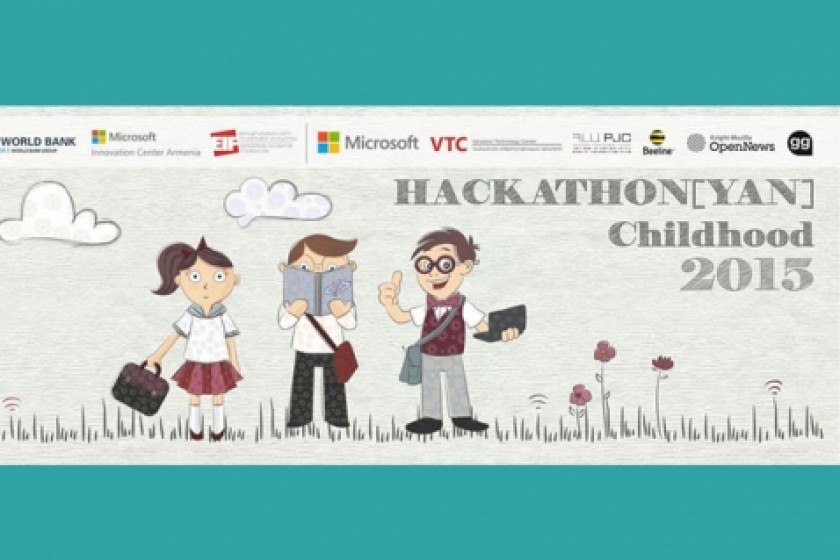 70 teams (250 representatives) took part in the contest on December 12-13 making it the largest technology competition of 2015 in Armenia.

The teams developed solutions to different problems in 24 hours during the 5th annual Hackathon and presented them to specialists and mentors.

“Discount manager” team was awarded by Microsoft Innovation Center for the best solutions to make small and medium size businesses’ life easier. “Discount manager” developed an app that informs the subscribers about discounts in nearby shops. MIC Armenia highlighted that the award will not only consist AMD 400 000 but also technological and business support to put their idea into life.

“Instahire” team won the first prize AMD 400 000: the award was given by the World Bank and Enterprise Incubator Foundation for offering an innovation solution containing social inclusion. The team made an online platform, using which the employers can find employees.

Hackathon [Yan] Childhood 2015 contest was supported by ArmenTel (brand Beeline). The contestants were able to develop their projects using Internet connection provided by Beeline during the whole contest.

“Mergeify” presents an app that gives the opportunity to create a video clip for a given sentence using videos on the Internet.

“Game engine” team developed an interesting game and “Stereo-TV” created an app that enables to merge 2 videos and show them on the same screen.

“Mergeify” also got an encouraging gift- Kindle from U.S. Embassy.

It was also stated during the award ceremony that because no team offered a solution that would match the award category set by Knight-Mozilla OpenNews, Public Journalism Club (PJC) will meet with the winners again and will award the best matching team on behalf of the fund having locked at the projects in a detailed manner.

“Hackathon [Yan] Childhood 2015 contest has taken place for the 5th time in Armenia and year by year we encounter the development of IT in Armenia. The contest was broader geographically this year. Participants were not only teams from Yerevan, but also from Gyumri, Vanadzor, Ijevan, Gavar. The ideas were very interesting and innovative and can become highly requested products in the market if the appropriate work is done. It’s worth mentioning that our Center always helps startups with startup acceleration program and Hackathon is just the first step of it: following this, the youth gathers, creates teams and work on the joint idea”, Director of Microsoft Innovation Center Artashes Vardanyan told Itel.am.