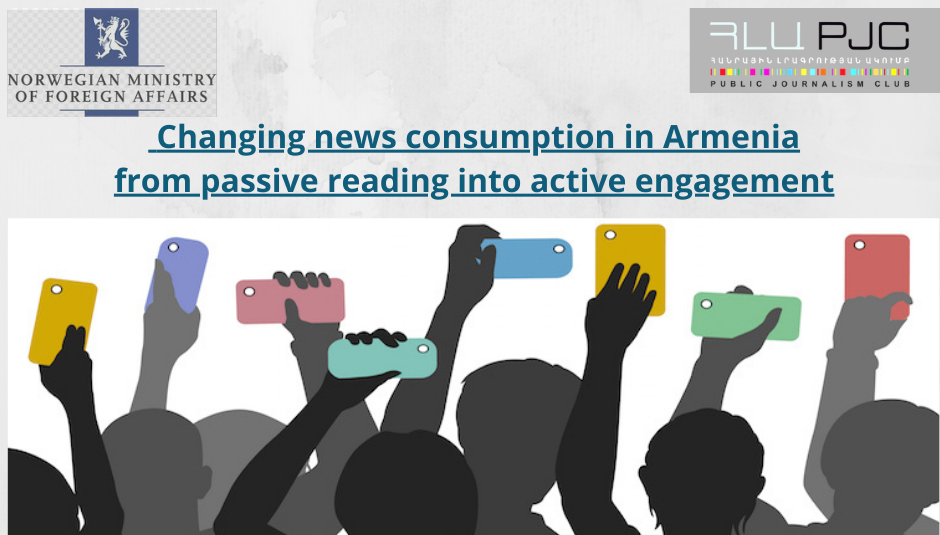 The project “Changing news consumption in Armenia from passive reading into active engagement” was implemented from October 2011 to October 2012, with the support of the Norwegian Foreign Ministry.

The goal of the project was democratizing the Armenian traditional and social media, diversifying its content, empowering public to use social tools for making a social impact and to influence decision makers of the country by changing the news consumption in Armenia from passive reading to active engagement.

The project aimed at encouragement of news consumers to be engaged in active consumption and dissemination of information, produce and disseminate alternative information/content for social networks and traditional media through iReport (working title was changed into MyNews) – Mynews.am gamified citizen reporting platform.

Short term results of the project were:
• Promotion of citizen journalism through gamified website and social network of citizen reporters.
• Creation of the first competitive and interactive online platform, with instructive and engaging structure, attracting users towards citizen reporting by rewards system.

Long-term impact of the project were:
• Mobilization of an “army” of citizen reporters, who would develop the habit of capturing the eyewitness accounts, reporting on what they have seen and using social networks effectively, for sharing information on different social platforms as well reporting to local media. Such skills are in particularly valuable during significant events in the country’s political developments. Educated and skillful citizen reporters across Armenia, that can report on community issues and important events such as elections, for example.