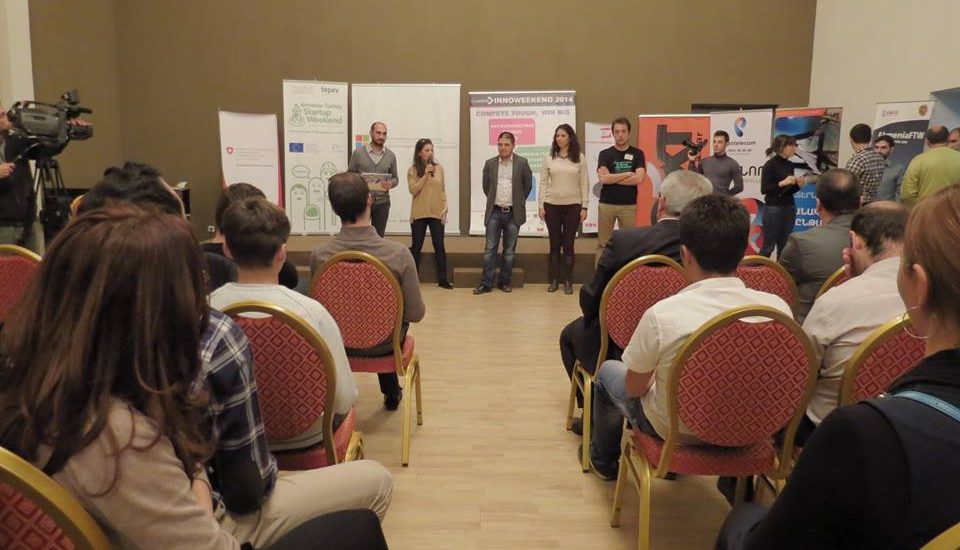 Yerevan-Gyumri, November 7-9: Public Journalism Club (PJC/Armenia) and the Economic Policy Research Foundation of Turkey (TEPAV/Turkey) brought together over 50 startup entrepreneurs, experts and investors from Armenia and Turkey as part of their joint ‘‘Exchange of Entrepreneurs’’ project funded by the European Union within the framework of the programme ‘‘Support to the Armenia-Turkey Normalisation Process’’.

The Startup Weekend was held among InnoWeekend, the most fascinating event of the year that brought together three large scale technology related initiatives, i.e. the Armenia-Turkey Startup Weekend, Hakathon[Yan] 2014 and USAID supported Entrepreneurship Workshop FTW.

During the kick-off of the Armenia-Turkey Startup Weekend in Yerevan, the participating startups from Armenia and Turkey pitched their initial ideas. They were given 60 seconds to present the idea to be implemented with use of new technologies. Around 15 pitches were made; and ideas ranging from a “Business Radio” to “Easy Parking” and to “Gift Card Store” were presented by the young entrepreneurs from both countries. Following the presentation of startup ideas,  a participatory voting process followed where each participant had the chance to cast up to three votes to any of the ideas. In the end six ideas were selected and mixed teams were formed around those ideas with members both from Armenia and Turkey. In the last part of the kick-off session, Ece Kasap and Emin Okutan, accredited Startup Weekend facilitator and SW organizer helped the teams to understand the requirements that they needed to satisfy including the technical solution, the business model, customer validation, which were also used as the main judging criteria.

On November 8th, the teams travelled to Gyumri, where they continued developing their ideas throughout 24 sleepless hours.

On November 9th, over 200 participants and guests gathered at the auditorium of the Gyumri Technology Park for the closing ceremony of the InnoWeekend. The teams participating in the Armenia-Turkey Startup Weekend received awards in three main categories – Best Idea, Best Team and Presentation, and finally the Winning Team.

“Seeing Hands” and “Home Planning” were the two teams that were acknowledged for their distinguished ideas they proposed and developed.

The members of the team “ChocoLove” were recognized for their great team-work and their spectacular presentation to the panel of judges.

And finally, the “WeCloud” team was recognized as the Winner of the Armenia-Turkey Startup Weekend.

The judging panel that evaluated the six projects presented by the teams included a Silicon Valley based Angel Investor, who found all the presented ideas very interesting and made recommendation to teams including further collaboration with their mentors for the refining of their ideas.

Amongst the recognized startup ideas, the, project “Home Planning” intends to create a website dedicated to online home and office design. “Seeing Hands” combines a social and business idea, i.e. professional massage services performed by visually-impaired therapists who are believed to have a heightened sense and touch. Connecting the supply and the demand on the car rental market is the idea underlying the project called “Rent a Car”, while “SpotCool” aspires to help visiting tourists to find the best attractions, souvenirs or local foods.

A “groundbreaking matchmaking idea” is proposed by the team with a sweet name-“ChocoLove”, which offers to connect people based on their love of chocolate and fun generally.

And finally the winning team proposed the “WeCloud” project – a market place for unused computer storage. The platform is supposed to collect free storage from private computers and sell or rent it to other clients.

Speaking at the closing ceremony, Seda Muardyan, president of the Public Journalism Club emphasized that the Armenia-Turkey Startup Weekend is unprecedented in its format, as it is the first event of its kind to bring together participants from both countries. “This is the first industry-to-industry exchange of such a scale with a delegation of 30 individuals from Turkey visiting Armenia. The Startup Weekend brought together representatives of two countries with closed borders without any diplomatic relations. As such it was an exceptional initiative”.

Ussal Şahbaz, the representative of TEPAV noted that the event was just the beginning of a successful cooperation and there is willingness to continue exploring the Armenian ICT sector. “Some investors from the Silicon Valley and Turkey have already expressed their intention to continue working with the teams either through mentoring or possible investments”, said Mr. Şahbaz.

Ece Kasap, the Startup Weekend facilitator expressed that the Armenia-Turkey Startup Weekend was her 10th event and it was one of the most impressive events she ever conducted.

There was great interest in the Armenia-Turkey Startup Weekend amongst the high level guests that visited Gyumri on November 8-9.

John Heffern, the U.S. Ambassador to Armenia was one of the first dignitaries to visit the 6 teams that talked to him about their ideas and their future plans. The Ambassador was impressed by the teams and their work, judging from the tweets he shared with his followers after the visit. Other dignitaries to visit the Armenia-Turkey Startup Weekend included Lukas Gasser, the ambassador of Switzerland to Armenia; Samvel Balasanyan, the Gyumri mayor; delegates from the Organisation of the Black Sea Economic Cooperation.

Startup Weekend participants also had an opportunity to attend different sessions delivered by delegates from Turkey and the U.S. that helped them better understand investor and startup relations, prepare for project pitches and benefit from the wisdom of the experienced and established entrepreneurs and experts.

Overall the event was considered an outstanding success both by participants and the guests, and everyone was further inspired when Seda Muradyan noted in her closing speech that a follow-up initiative is being discussed with the Microsoft Innovation Center that includes a longer term partnership between four startup teams – two from Armenia and two from Turkey”.

Startup Weekend is a competition that follows international standards, during which new products are created. The event allows participants share business ideas and establish long lasting contacts. The startup entrepreneurs team up around selected ideas and create prototypes.  At the end of the Startup Weekend, a panel of expert judges selects the best teams.