Woodlands in Armenia continues to shrink. What do the numbers and experts say?

The section on Environmental Protection of the 2021-2026 Government Program clearly states that the sustainable management of woodlands is one of the top priorities the government wishes to achieve in the coming 5 years.

The document specifically states that one of the government’s primary goals is the protection and preservation of forests, the expansion of forested areas through afforestation and reforestation, as well as the continuous strengthening of the capacity for their implementation.

Fact Investigation Platform decided to explore the state of woodlands in Armenia in the recent years and to find out the extent to which their protection has improved since the new authorities took office in 2018.

Armenia’s forest resources are noticeably scarce. According to the results of the last national forest inventory carried out in 1993, forests and forest lands constitute 11.2% of Armenia’s overall territory which amounts to a total of 460.000 hectares of land area. Of this, 334.100 hectares are forest lands.

In Georgia and Azerbaijan, interestingly, forests take up 40% and 11.8% of the countries’ total land area.

Forests in Armenia are mainly found in only three provinces- Tavush, Kotayk and Syunik.

Since no inventory has been carried out since 1993, the true extent of forests in Armenia remains unknown.

Some statistics on tree felling. 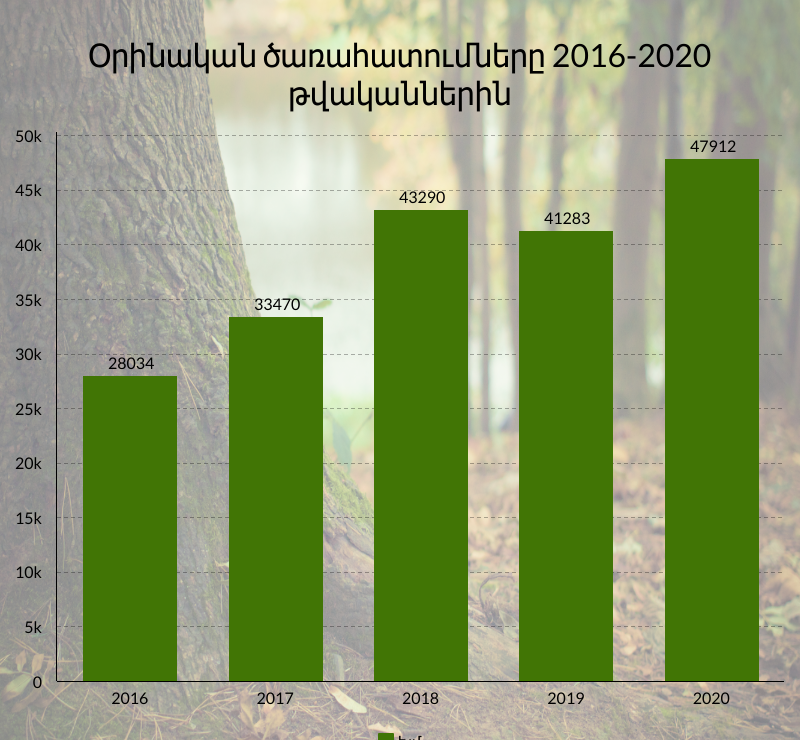 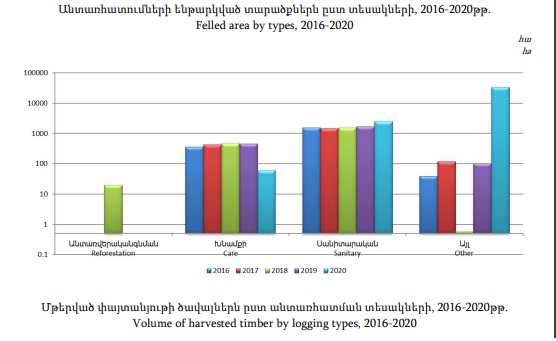 The Committee said most of the legal felling was carried out for restoration and forest maintenance. However, in 2020, trees were logged predominantly for other reasons which the Committee did not specify.

Illegal logging is cited as the main reason for deforestation and the shrinking volumes of forest lands.

As far as illegal logging is concerned, a record-breaking volume of timber has been harvested since 2016. In 2017 alone, as many as 30720 trees have been logged. In the subsequent years, this number gradually decreased. In 2018 and 2020, the Environmental Protection and Mining Inspection Body of Armenia has recorded cases of the illegal logging of 13.000 trees. In 2019, only 7228 trees have been illegally logged. (I am referring to multiple cases here that occurred simultaneously. None of the relevant structures regard this as an instance of organized crime.) 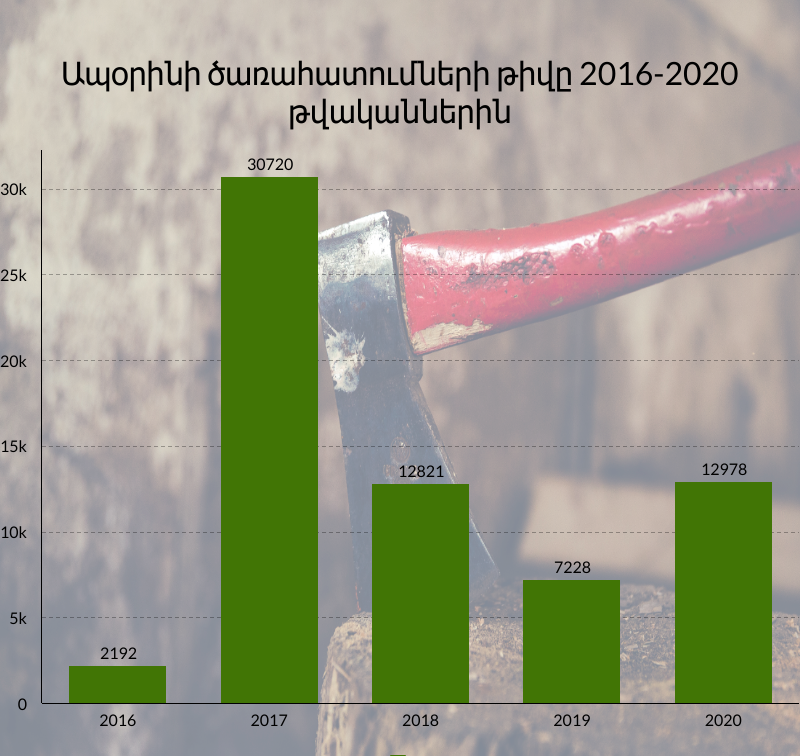 The data published by the Statistical Committee shows that reforestation and afforestation activities have significantly multiplied in recent years. 2019 was the most productive year in this regard, boasting a good 2747 hectares of afforested land. 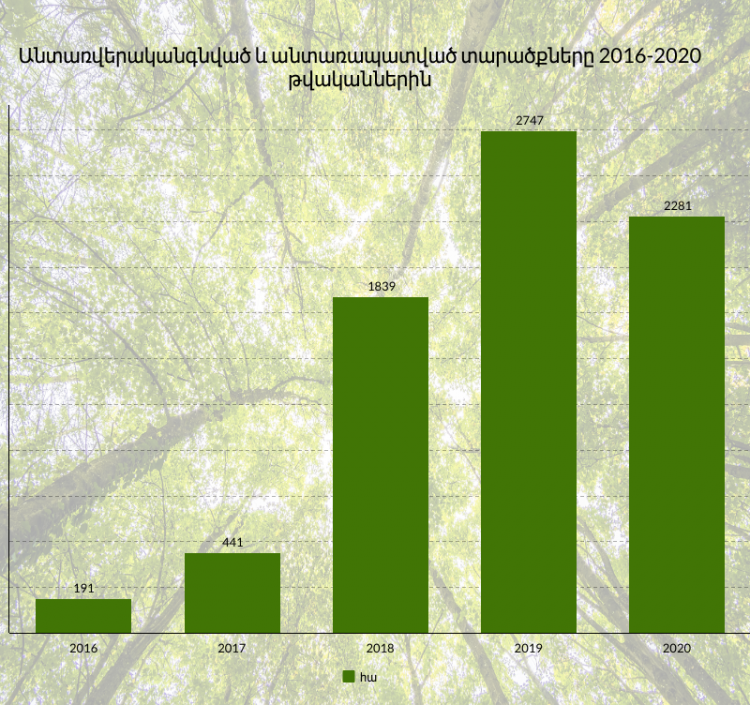 State non-profit “Hayantar” told Fip.am that in the last 5 years, a total of 493.5 hectares of land has been forested by all of the organization’s branches. 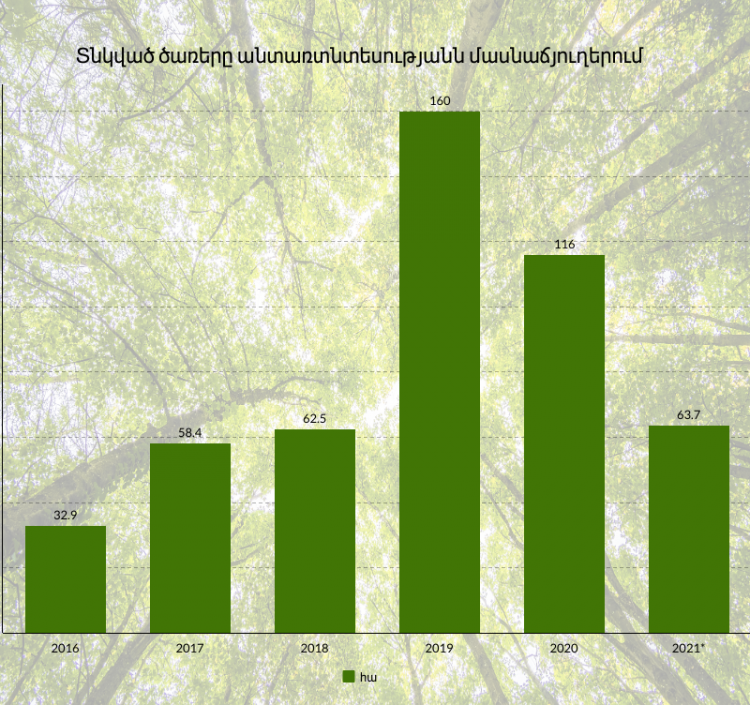 Trees planted by the forestry’s branches.The data for 2021 are as of October 31.

The wildfires that flared up in last couple of years have been no less calamitous.

The largest of all was the one that broke out in Khosrov Forest State Reserve in 2017. We were told by the Ministry of Environment that the cause of the fire is still unknown. The authority said a large number of junipers and deciduous trees have been burned down by the fire. The latter have been completely reforested․ However, the fire recovery of junipers lasts much longer.

On August 3, 2021, a fire broke out in Zangezur Biosphere Complex located in the south of Armenia, wiping off 17 hectares of woodland, of which 4.5 hectares belonged to Arevik National Park.

Just a month later, a much larger wildfire broke out in Arevik, completely demolishing 713 hectares of forest land. What caused the fire continues to remain a mystery. The case is currently under investigation.

What do environmentalists think?

In 2017, the members of “Eco House and Camp” environmental initiative joined their fellows in protecting the forests of Dilijan National Park and its surrounding territories located in Tavursh Region. Member Gor Hovhannisyan told Fip.am that based on their estimates, more trees have been cut down in the last 3 years than before the 2018 revolution. He believes that the reason why illegal logging has subsided is that many of the cases have been artificially legalized. “It is beyond obvious that the clandestine lumberjacks of these areas have legal logging areas. Before, when logging was by and large illegal, they would fell the trees with reservations or at least in secret. Now, they harvest legally- without fear and a lot more than the allowable volume. No specialized surveillance is being carried out whatsoever. The forests lying along the Dilijan-Vanadzor highway hadn’t been touched for years. No tree was cut there for 100 years. There were simply no logging sites there. But go figure! They’re now felling trees just 200-300 away from the motorway. They now call it “sanitary logging” as if they’re true professionals of the field,” he thinks.

Hovhannisyan said the management of Dilijan National Park has changed several times in the last couple of years- often due to the efforts of environmental activists. The last shift took place quite recently. And in the midst of all the subsequent havoc, illegal logging gradually ran out of control.

“The situation now is catastrophic. It improved at some point but didn’t last. Due to the reassignment, designation and the dismissal of former officials involved in illegal logging, these woodchoppers decided to get payback from the forests by exacting their revenge on the poor trees. In the harvesting site of one of those “angry birds”, over 150 trees were cut down without anyone noticing. Things are much more catastrophic in Ijevan. In just a few visits, it was found out that many of the forests there are simply consigned to oblivion,” said the environmentalist with a special emphasis on the impunity the loggers are privileged to enjoy.

Hovhannisyan is confident that the true extent of forest lands in Armenia is much smaller than what has been officially registered. All of the green areas on our maps have long ceased to be forests. Very soon, many of them won’t even be regarded as forests because they have literally turned into glades. The forest lands that I saw back in 2016 do not exist anymore. Presently, forest lands constitute only 7-8 percent of the country’s territory at best.”

Sustainable forest management expert Areg Karapetyan told Fip.am that the size of the forests has indeed been significantly reduced, but it is not clear to what extent.

He also mentioned that in addition to the decrease in size, the quality of the forests has also significantly declined due to unsustainable management.

“Forests have lost their functionality and their ability to regenerate. Over the years, this will leave a big negative mark on the total area of the country’s forested lands. This is due to unsustainable forest management where forest resources are exploited disproportionately to their capacity to self-restore.”

According to him, no radical measures have been taken in recent years to improve the situation. Here, a multifarious approach is necessary. Now, most of the lumber is used as firewood as in rural communities, there are simply no cheap alternatives to it.

“No drastic action has been taken before and there is certainly none being taken today. That is a fact. Without radical steps, this infrastructure cannot be brought back to life. It does not matter how much we toil or how strictly the trees are protected against illegal loggers. Unless the problems of affordable fuel, literacy, education, and awareness are solved, forests will remain the most vulnerable resource.”

Karapetyan noted that forests in Armenia play a much greater environmental role than those in lowland countries, as they protect the soil and regulate the waterflow. In addition, they are also vital reserves of biodiversity.

“The tragedy is that none of this is ever duly appreciated. All of its great potential is just wasted on heating a coffeepot. This is, of course, a big pain to witness. Put bluntly, this is a sign of sheer illiteracy. Unfortunately, we as a nation, have not achieved a decent appreciate of this vital resource,” said Areg Karapetyan.

He added that the first thing to do is to preserve the forests that we have and then to plan the planting of more trees. “Afforestation and reforestation are, of course, good. Both can be done. However, the protection of existing forests must be addressed in the first place. “Before we think about adding, we must first address the necessity to preserve what is left of the ecosystem. Once we have figured that out, the issue of restoring the degraded forests and afforestation can be discussed.”

Despite the government’s claims that the protection of forests in Armenia is a priority, forest lands are ceaselessly shrinking. And even though afforestation and reforestation are widely practiced now, illegal logging does not seem to want to fall behind. In fact, the volumes of legal logging have also significantly increased.