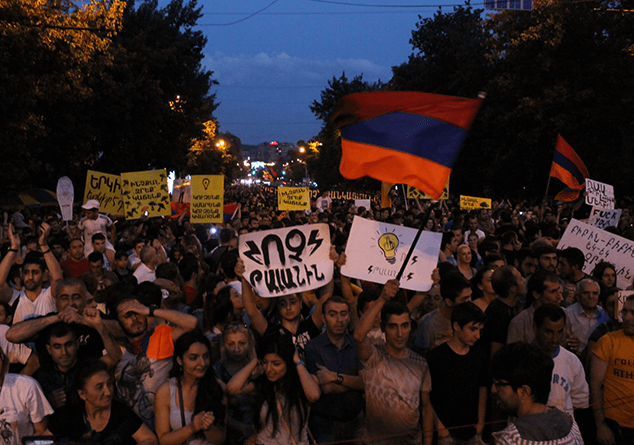 Today the Journalists’ Union hosted the opening of the #ElectricYerevan 2015 photo exhibition which was followed by the first screening of the documentary #electricyerevan. A Day of Violated Rights.

The exhibition is a unique chronicling of the most remarkable moments of the events unfolding on Baghramyan Avenue in June 22-July 6, 2015 as seen by the photographers of PHOTOLURE News Agency. The photo exhibition which features over 70 pieces will be open till November 26.

“Today we are launching a photo exhibition, a unique showcase because it is totally dedicated to only one event. Along with dozens of media, PHOTOLURE spent two whole weeks to cover the events on Baghramyan Avenue, and now we are presenting you the most remarkable images we captured during the events. The allusive photo captions as The Dawns at Baghramyan Are Quiet, Pompeii: The Last Day, Sodom and Gomorrah, etc. – which have already got the approval of several specialists – can truly compliment any exhibition. A number of renowned world media regarded highly the photo by Vahram Baghdasaryan – the unintended symbol of the entire movement,” said Melik Baghdasaryan, Head of the PHOTOLURE News Agency.

Following the opening of the photo exhibition the representatives of the civil society, media, public and international agencies, lawmakers, ambassadors and rights defenders were invited to attend the first screening of the documentary #electricyerevan. A Day of Violated Rights.

The 30-minute film created by the Public Journalism Club is an eyewitness account of the incidents and developments that occurred in the morning of June 23.

“The violence on June 23 targeted journalists as well. 13 journalists were detained while they were covering the protests. 24 journalists are reported to have been injured or detained, which is an unprecedented number for the recent years and a major concern. On June 23, though, we saw that the police officers could act in a different way as well, not only arresting people – behavior which I hope we will observe in future, too,” said Seda Muradyan, Head of the Public Journalism Club.

The documentary features over 20 interviews with the representatives of the Police, Human Rights Defender’s Office, civil society organizations, rights defenders and journalists who worked on Baghramyan Avenue.

“…A journalist’s duty is to cover events and it is the Police that must ensure their safety during work…” says Deputy Human Rights Defender Armen Grigoryan in the interview for the documentary.

On the morning of June 23 the Police detained 246 protesters. In the interviews the rights defenders share their concern over the rights violations that occurred then and speak on the possible developments.

“From a rights perspective, or given the clash on June 23 is viewed as a step back in the legal system it is generally a concern but to state that we should observe the Police’s similar actions following the June 23 incident. Yet, in the next days we saw a positive shift in their actions,” says Grigoryan.

“The protests had a positive effect on Armenia’s big picture in the world since our country instantly grabbed the world’s attention. And the international media showed respect to Armenians when covering the events. It is all because countries and nations usually respect the peoples which still have the heart and nerve and sinew to fight,” believes Avetik Ishkhanyan, Chairman of Helsinki Committee of Armenia.

The film and the exhibition are made possible through the support of Open Society Foundations-Armenia.