Damage in the hundreds of millions: Hovik Abrahamyan fish-farmings’ sue the state

Fish-farming has become one of the most lucrative businesses in Armenia. The majority of the existing fish farms have been founded by high-ranking officials and their kin. These farms, however, cause a great deal of damage to the country’s nature and environment.

Some of the larger farms are run by the relatives of Hovik Abrahamyan, former Prime Minister and President of the National Assembly of Armenia. As stated in official sources, these businesses have caused the state financial losses worth hundreds of millions of drams.

Infringements have been found in “Mkchyan Fish” and “Meri Fish”, two of the companies owned by the Abrahamyan family. Both enterprises have used a significant amount of water without any relevant permits, inflicting upon the state an economic damage worth 650 million Armenian drams.

Mkchyan Fish owns ponds in Zorak and Mkchyan communities of Ararat Region. According to the information provided by the Environmental Protection and Mining Inspection Body of the Ministry of Environment of Armenia, by exploiting water resources without permission, the company has violated the requirements of Article 22, Section 1, Subsection A of the RA Law on Environmental Monitoring. Based on their calculations, the former prime minister’s family has induced a financial harm worth 585 million and 170 thousand drams through this company alone.

It was later found out that the Abrahamyan family does not intend to recompense the state for the inflicted financial harm and that it has filed a lawsuit. The company has correspondingly appealed the Inspectorate’s decision. As reported by the public informative portal DataLex, the court has satisfied the company’s claim and has exempted it from compensating for the financial harm it has induced. The Environmental Protection and Mining Inspection Body, however, has appealed the ruling in the Court of Appeal and the hearings are planned to take place in 2023.

The other company owned by the Abrahamyan family, “Meri Fish”, has also been fined by the Inspectorate for using water resources without permission- this time, a good 64 million 722 thousand drams. The company was founded in 2014. Until September 2020, the company was owned by Hovik Abrahamyan’s brother Henrik Abrahamyan. For several consecutive years, the company has been managed by Henrik’s daughter, Meri Abrahamyan.

“Mery Fish” has also refused to compensate for the financial losses it has inflicted upon the state and has again filed a lawsuit against the Inspection Body which has been satisfied by the court. Here as well, the Inspection Body has appealed the decision in the Court of Appeal. The case will be heard in August 2022.

While both cases are still being reviewed by the court in an attempt to regain the financial harm caused by these two companies, in August 2020, the Abrahamyan family decided to sell the company “Meri Fish” to Mushegh Nikoghosyan. Mushegh is also an avid businessman. He is the son of Gurgen Nikoghosyan, the owner of Armash Gristmill and the company “Manana Grain”.

It is worth mentioning that soon after “Meri Fish” was purchased, the Nikoghosyan family referred to the Ministry of Environment seeking to expand the territory of the farm. On August 31 of this year, the Ministry satisfied the company’s bid. As a result, 36 new ponds are going to be built in the farm, giving its owners a total of 96 ponds occupying 4300 sq. m of land.

Another company founded by the Abrahamyan family in 2010, “Mkchyan Fish Food”, was bought by Gagik Tsarukyan and Sedrak Arustamyan in 2012. The two businessmen bought the company’s entire stock, buying 67% and 33% of the shares respectively. This company was also created by Henrik Abrahamyan, but how it ended up in the hands of its current owners is not a mere twist of fate. Gagik Tsarukyan, who is a famous billionaire, is the affinal kin of Hovik Abrahamyan, and Sedrak Arustamyan’s is his dear friend. All three of them are presently charged with several criminal offenses.

Due to the ruthless, unregulated, and unlawful exploitation of the artesian water resources of the Ararat Region in the last 15 years, the natural processes of the restoration of groundwater resources have been put to danger. The demand and supply of water in the region have become severely disproportionate. As a result of the ineptitude and permissiveness of the authorized bodies regulating water usage and preservation, many lands in 30 different communities of Ararat and Armavir regions have dried out or turned into swamps, and over 4000 hectares of agricultural land has become barren or arid. Because of these changes, the local population has to face grave socioeconomic problems.

Environmental activists have already raised the alarm- these fish-farms are recklessly drinking up the groundwater of the Ararat Valley. “The Government has granted fish-farmers unbounded permission to inexhaustibly use the water resources which has brought about a true catastrophe,” says the director of EcoLur Informational NGO, Ms. Inga Zarafyan.

According to environmentalists, fish farmers have depleted the region’s water resources to such an extent that Armenia’s former authorities were simply forced to find ways of restricting the permissions they themselves had awarded to the farmers several years ago. “Because the balance has already been disturbed, it is impossible to estimate if these groundwater resources will ever be restored. The depletion of water is sadly not the only problem we are facing. Salinization of soil is our next big challenge,” says Inga Zarafyan. 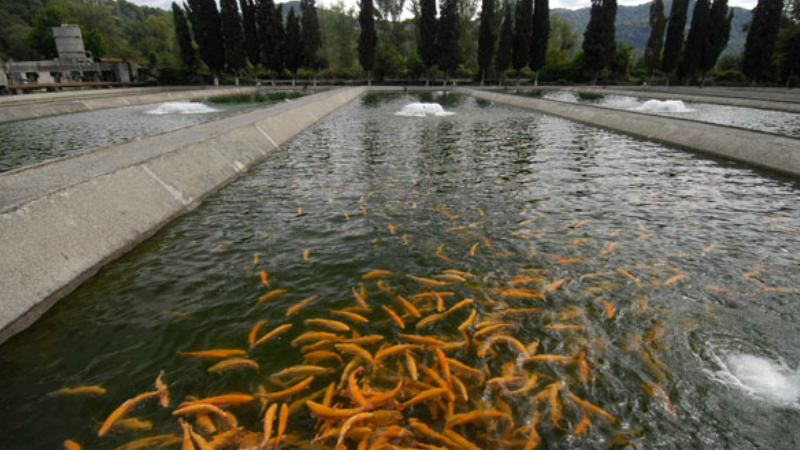 The regulatory inspections carried out by different authorities and the ensuing fines (which, by the way, are never duly paid), Inga Zarafyan rendered insufficient. She believes that the fight against the oligarch-owned fish-farms should be prompter and swifter.

“The government must take drastic measures against these businesses. It must not think twice before locking up those wells. The Ararat valley which is of crucial importance for the country is plummeting to its destruction. This has long become a political problem because it concerns our security just as much as it concerns our environment. There are 6 to 7 fish farms that have been continually disrupting the balance between groundwater and the water area above the ground with their excessive consumption,” says the environmentalist. 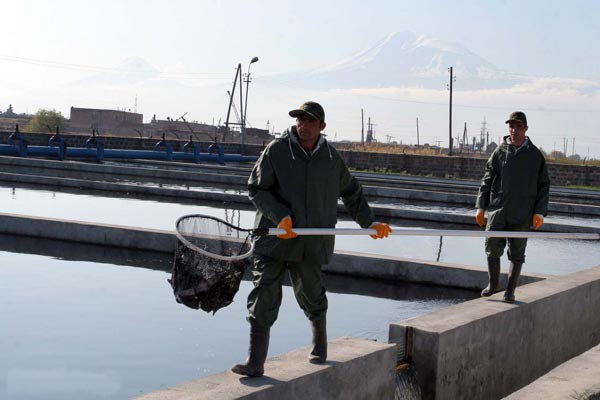 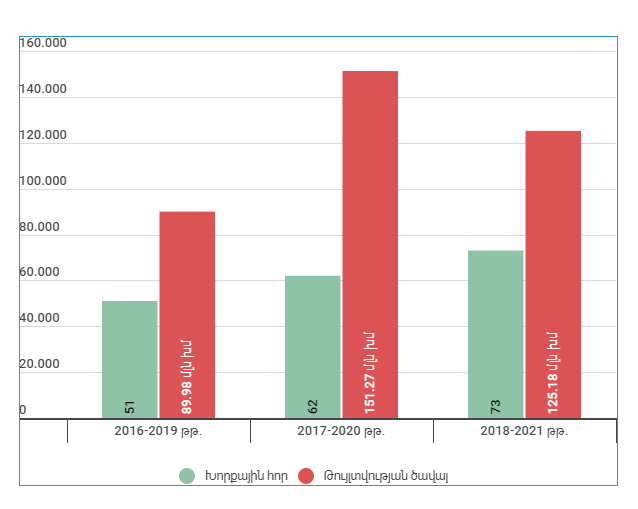 In the last 10 to 15 years, new large fish farms have sprouted in Ejmiatsin and Masis that have significantly exceeded their allowed volume of groundwater, putting its natural processes to danger and instigating serious socioeconomic problems.

The Araks community of Armavir Region, as claimed by its residents, is among those that have suffered the worst of these consequences. They are convinced that the excessive consumption of groundwater by these fish farms will soon bring destruction to Ararat Valley.

“The exhaustive extraction of any deposit is harmful for the nature,” says Tatul Tonoyan, one of the community’s residents. He continues by saying that “sooner or later, the government will have to make the tough decision of choosing between agriculture and nature and fish farming.”

Due to the lack of irrigation water, the residents of Araks have left over 50 hectares of agricultural land uncultivated. For this they blame the fish farms, claiming they guzzle all the artesian water, and since the village has a low elevation, it takes ages for the remaining water to reach the community.

“Drinking water is supplied with very low pressure. This is all because of the fish farms. Each of these ponds is fed from a separate artesian well. There are many fish farms in this area- all using groundwater delivered by powerful pumps. If there weren’t so many fish farms, we would get all the water we need,” says the outraged resident.

“It would be impossible to get water without a pump now. They have drilled so many wells for the fish farms that the resources of artesian water are almost used up. Drinking water has comes with very low pressure and cannot reach us without a pump,” says Hambardzum Yeranyan. “There are 4 or 5 fish farms in this village. Each one of these farms has at least 3 or 4 large wells,” he continued.

For the people living in Ararat Valley, agronomy is the primary way to make a living. Because of this problem, many of the residents have already fled from their homes and emigrated to Russia or different countries in Europe.

“I can’t even remember where my property is. I don’t cultivate it at all. I don’t even go there- all because of the lack of water. We don’t get any water there. There are times when there’s barely enough water for drinking. The fish-farms are draining it all. They drilled their own wells on time and can get all the water they want. In our village alone, there used to be 35 wells. Because of the farms, we often don’t even get proper drinking water. They come here, open their businesses, flourish and then deprive our lands of water,” said Simon Petrosyan, another resident of Araks.

If the forewarning forecasts of the environmentalist come to pass, over 400.000 villagers living in the Valley are faced with the risk of completely losing their chances to cultivate their lands. This can potentially cause major socioeconomic problems and trigger a new wave of emigration.